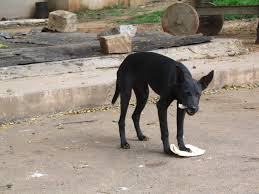 This is the story of a money lender who has always devoted to performing yajnas etc. So liberally did he gave donations that even he was not left with anything to support himself. Then his wife said, In the neighboring villages lives a rich man who buys Merits. So go to him and bring some money by selling some of your merits so that we might pull on any how then the man agreed to go there. His wife baked four chapatti and gave them to him to be eaten on the way. He approached the city. There was a tank at the place. When he sat down to eat, a bitch came up there, she and her younger ones had nothing to eat for the last three days. Seeing the hungry bitch he offered one of the chapatti to her. She ate up to the chapatti, Then he gave the another one  which too was eaten by. Thus he gave all the four chapatti to her one by one. The bitch appeased her hunger. Thus having forgone his food he approached the rich man. Approaching him he told his intention of selling his merits. The rich man said that he should come in the afternoon.

Now the wife of the rich man was inordinately devoted to her husband. He asked his wife which merit is the best worth being purchased. The wife said only that merit is worth which he has earned this day by feeding this hungry bitch while he was sitting on the bank of the tank.

The man came to the rich man on the appointed time and said-Which of my merits would you like to purchase? He rich man said – I want to go in for the same yajna that you have earned today. I have not performed any yajna today because I didn’t have any money then how? At the rich man said- I want to purchase the same merit that you have earned by offering the four chapattis to the bitch. The man said – how could you know that/ the rich man said – My wife is devoted to me so she who told me. then the man said- very well, you may take the desired merit. But tell me what price you are going to pay for it. The rich man said I shall give u pearls and diamonds equal in weight of chapattis. The man consented to it and as agreed upon by him and making four chapattis roughly equal in weight to his chapattis. Put them on one of the scales and put peals and diamonds on the other but in the spite putting a number of them, the scales containing the chapattis did not rise from the ground. At this the rich man said I will give you more jewels. When the man noticed this miraculous effect of his merit. He said- he would not to sell.

Thereafter the man left and gathering some pebbles and pieces of glass at the bank of the same tank and tying them up in a piece of cloth returned home. On reaching home he handed over the small bundle to his wife. When she opened the bundle she found in it diamonds, emeralds and rubies etc. she was much pleased. She asked to her husband – From where did you get so many diamonds and emeralds. The man said – ‘why are you jesting’ wife said – I am not jesting. I have opened the bundle and seen with my own eyes.

Then the man said fetched here! Let me see it. He was astonished to look at them. He considered it to be the effect of that meritorious work. Then he explained everything to his wife.

There is intended to convey to the readers is that the donation given to a distressed person who is in dire necessity of it, multiplies innumerable times. By the grace of God even pebbles and pieces of stones turn into diamonds and emeralds. 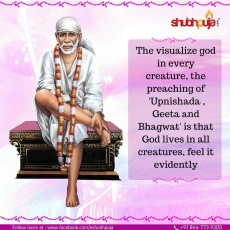 At one time Mr. Tarkhad had come to Shirdi, noon meals were ready and plates were being prepared while at the same time a dog came there and began to bark. Mrs. Tarkhad stood quickly and she threw a piece of chapati for the dog. The dog ate it with taste. At evening when she sat in a mosque, Baba asked her :-Mother! Today you fed me with great pleasure, hungry soul got satisfied. Always keep doing so, some time you will really have a reward for it. Sitting in this mosque I will never tell a lie . Always favor me like this. Feed the hungry first and then take your milk. She could not understand the meaning of the words of the Baba , so she questioned :- How can i feed others? I am myself depend on  others and i pay them for the meal. Baba began to say : by accepting that chapati my soul became satisfied and till now i am belching . Before taking the meal the dog you saw and whom you gave a piece of chapati, actually that is my own form. I am wondering in these type of forms . One who visualize me in these living beings he is very dear to me, therefore forgetting duality or discrimination you keep me serving. She became compassionate to accept this nectar preaching and her eyes became wet, throat choked and her pleasure new no bounds. 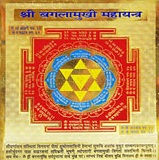 Devi Baglamukhi is eighth among 10 mahavidyas, where 10 mahavidyas are ten essential energies that are also 10 goddesses. Baglamukhi yantra is very powerful to fight against enemies. It consist of triangles, hexagonal, eight petal lotus, sixteen petal lotus and bhupura.

The presiding deity goddess Baglamukhi is the controller of this powerful yantra which recharges yantra with occult forces.

The mantra is recited for one hundred thousand times. The mantra for recital is

The sage of this mantra is narada the metre is bharti, the deity of the mantra is Bagla Mukhi. The bija is hrim and the shakti is svaha.

How to do worship of this Yantra?

Where to place it? 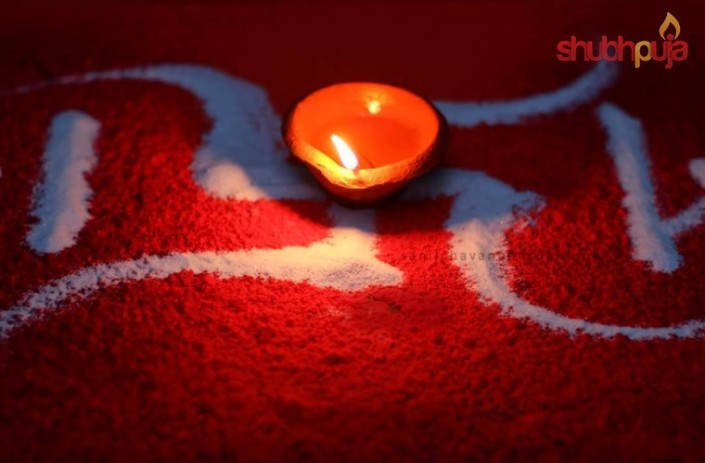 When we light the earthen lamp  there is combination of Five Divine Tattwas i.e. Soil (Earth, Fire, Air, water & Ether) & we chant the Mantra of Lord so it manifests  divinity in our family.

Also, these lamps are made by potters with faith, emotion & feeling of Love for God & Goddess. These are made clay of the Divine Soil i.e. “Earth Element”

Thus,when we light earthen lamps on Festival like deepawali, govardhan puja and other pujas, we bring in the positivity.

The holy shrine of Kedarnath 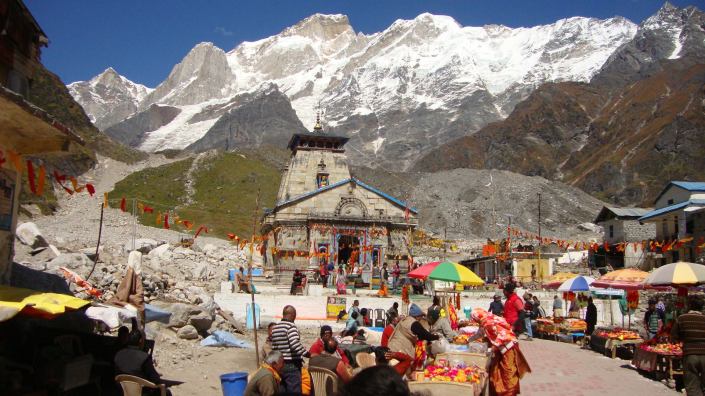 The Holy Shrine of Kedarnath (one of the 12 Jyotir Lingas in Hinduism) is a beacon light of India’s most refined secularism. It is situated at a height of 3,583 m (11,755 ft), on the banks of the legendary Mandakini river, a tributary of Ganges. It is an impressive stone edifice of unknown date. The present structure is believed to have been constructed in the 8th century AD and is on a site adjacent to where Pandavas are believed to have built the temple.

It has one Garbhagriha (sanctum sanctorum) and a Mandap and stands on a plateau surrounded by mighty snow clad peaks and glaciers of the towering Himalayan Mountain Range. [One can see the majestic heights of Kedarnath peak 6,940 m (22,769 ft) and Kedar Dome 6,831 m (22,411 ft)].

The first hall inside Kedarnath Temple contains statues of the five Pandava brothers and Draupadi, Lord Krishna, Nandi, the vehicle of Shiva and Virabhadra, one of the guards of Shiva. A medium-size conical rough stone formation is in the Garbhagriha (sanctum sanctorum) is the ruling deity, Lord Kedarnath Ji. It is revered and worshiped as Sadashiva form of Lord Shiva.  Kedarnath, also means the ‘Lord of Kedar Khand’, the historical name of the region. 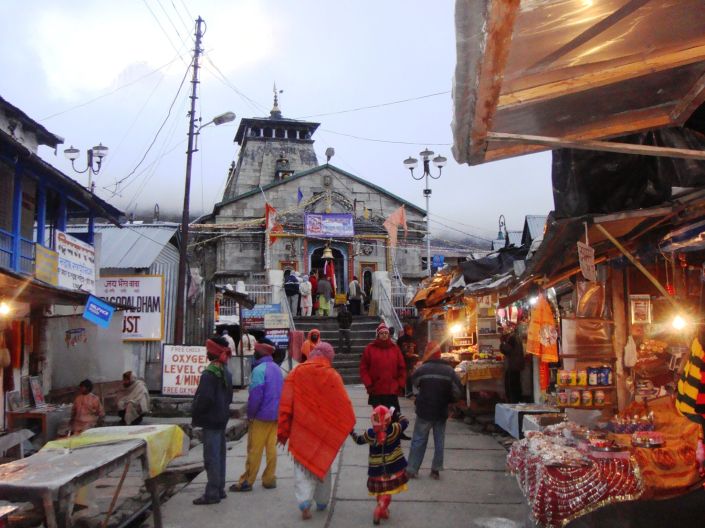 The head priest (Raval) of the Kedarnath temple belongs to the Veerashaiva community from Karnataka but pujas are carried out by Raval’s assistants on his instructions. There are five main priests for the temple, and they become head priests for one year by rotation. During Pooja of Lord Shiva at Kedaranath the mantras are pronounced in the Kannada language, a tradition hallowed by a history of hundreds of years.

Adi Shankara was believed to have revived this temple, along with the Holy Shrine of Badrinath.. 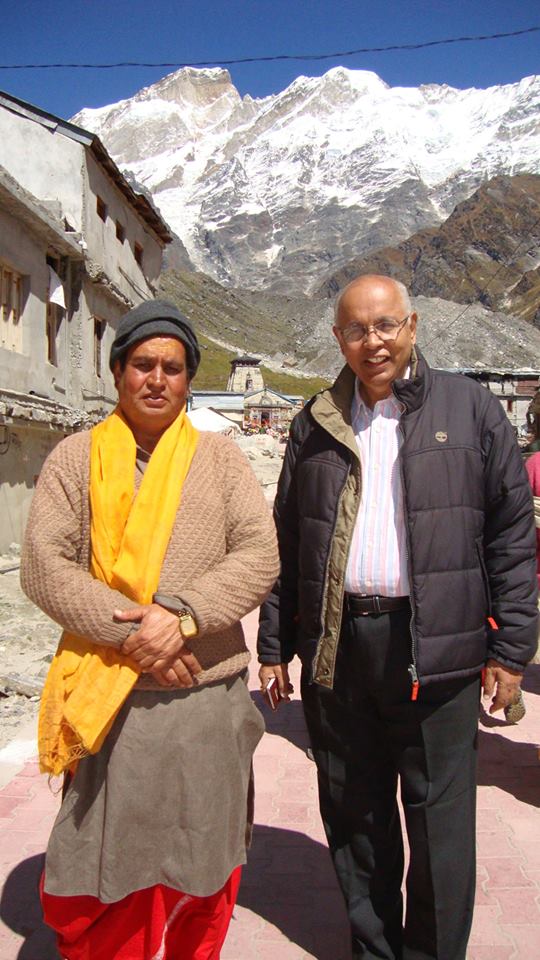 The temple is opened Akshaya Tritriya to Kartik Purnima (the autumn full moon, usually November). During the winter months, the Vigrahas (deities) from Kedarnath temple and the seat of the Lord are brought to Ukhimath and worshiped there for six months.

(He is the most renowned world economist on poverty alleviation and empowerment today. He has long association with United Nations for launching their initiatives on fight against hunger and providing micro assistance to most marginalised societies. He is a great scholar and has been teaching in University of London and Stanford University. He has travelled over 130 Countries and written numerous books. Deeply religious he has visited various holy shrines. We bring you glimpses of his travelogue.) 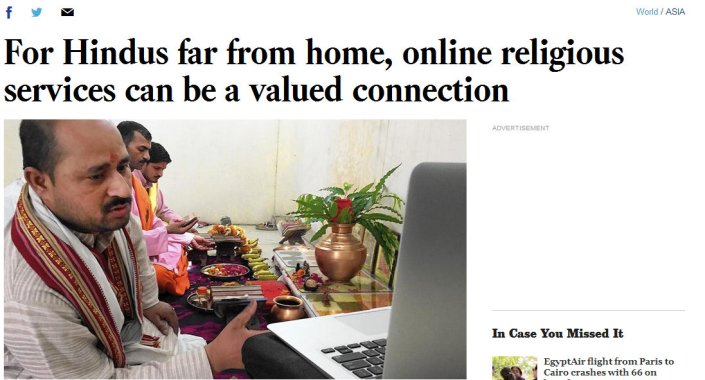 Puja for a problem free life! 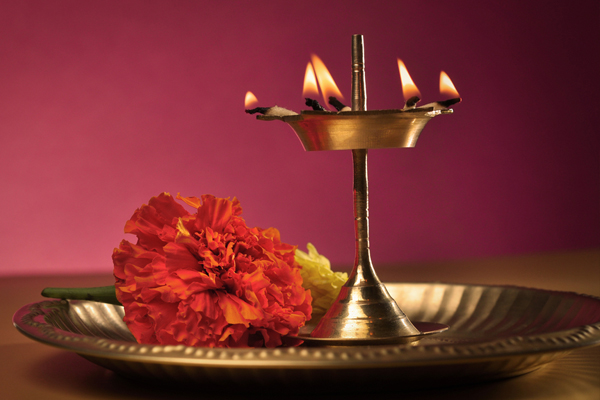 The divine act of ‘puja’ or also known as ‘pooja’ refers to the ceremonial worship by making an offering to the image of God, as per the definition in encyclopedia. The act performed by majority of us in our daily routine, yet very few of us realizes the true meaning of puja. It is an art of expressing our reverence and gratitude to the divine energy, by performing various rituals. It is a pious way of direct communication between our soul and its true master.

Puja is not just a ceremony for few minutes or hours, it helps to seek strength from God which helps us to deal with the ups and downs throughout the day. As the other ancient practices like Ayurveda and Yoga provides the natural healing of the mind, body and soul. The Hindu system of medicine and meditative practice keeps the person away from illness of body and mind. Similarly the practice of adoring God is the ancient technique to wake the positive energies and seek blessings from them.  ‘Puja is a form of yoga whose final result aimed to be the consciousness of god through homage to God.’

The mantra, yantra and tantra in puja help the devotees to awaken the positivity within and around him and channel the particular frequencies to resolve the problems. In simple words, puja is a homemade remedy- free of side effects that can be used any day and anytime to seek the strength from Almighty and face the difficulty.

Though every ritual and ingredient used during puja ceremony has their own unique significance but above all our willingness and modest attitude also play an important role. Adoring the positive energies with a right approach relieves us from the stress and also saves us from negative energies.