ANGER: It is your choice!

Anger is temporary state of madness. We are usually angry for what has happened in the past, or fighting with people to change them, or internal war as at times we regret our own faults and become angry on ourselves. The internal disharmony is projected upon others and we carry the baggage with ourselves.

We get angry because people and situation are not working according to us; but here we need to realize that it is actually impossible to change the situation or people around us. We just create bitterness within us and disturb our own thoughts.

Whenever you are angry, stop yourself and ask these few questions:

By intrapersonal communication and self introspection we comprehend that to stay peaceful is in our own hands. Anger is our personal choice and it entirely depends on us that which kind of response we choose. Further we can follow these five basic steps:

“Awareness of the problem that is causing irritation, acknowledge that I am responsible for the irritation or frustration and it’s in my control, acceptance of the fact that I am the creator of my anger, assent by detaching myself from the anger through withdrawing the power given to anger, realizing that I am a peaceful and powerful soul and coming back to my original self.”

Ray of Hope: Shankh or Conch

The beginning of propitious celebration is incomplete without the soothing tune of the conch or shankh. The trumpet sounds so peaceful to the ears and is purely a sign of brilliant and auspicious beginning. In Indian mythology, God Vishnu, the God of Preservation, is shown with a shankh in one hand and a chakra in the other. The shankh symbolizes positivity over negativity and it is blown as a ray of hope. During puja, shankh is also used as a container of holy water.

Why do we do Puja: Significance 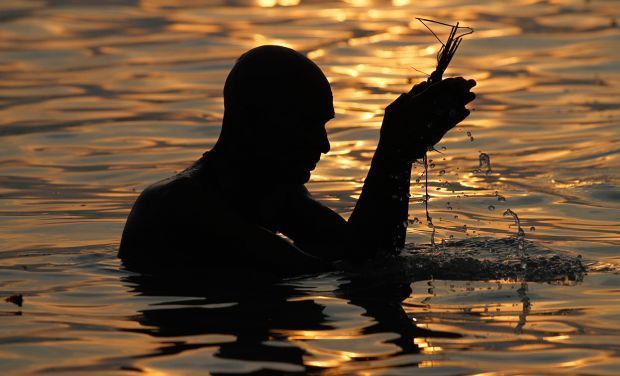 Since the beginning of the early man, even when they were oblivious to the act of worship or any presence of God, they still adored the natural elements in some form or the other. Even if they couldn’t acquire detailed knowledge about Almighty yet they expressed their gratitude towards the various elements of nature; as water, fire, wind, sun and soil were providing them with something. So the basic idea behind performing this act is to reciprocate the supreme love which is being showered upon us and expressing our gratitude for the selfless Universe.

We might say that even if we don’t perform the religious acts, we are still happy in our lives; so for thus Lord Krishna has said in the holy Bhagwad Gita;

Meaning- From the highest planet in the material world down to the lowest, all are places of misery wherein repeated birth and death take place. But one, who attains to my abode, O son of Kunti, never takes birth again.

So the few fortunate ones who realize the true nature of God, because of whom we exist in this world and survive, we perform this pious act to appreciate our existence and His divine grace upon us. Mortals have the biggest tendency of making mistakes, intentionally or unintentionally; so by remembering the divine power, honouring his divine presence and seeking forgiveness, we get free from the burden of guilt and rejoice our existence.

By being grateful for whatever we have received from this cosmic creation and feeling a sense of belongingness towards them, we express our honour that further leads to faith and devotion. Puja gives us the strength to surrender ourselves in the feet of holy power and staying constant at every situation. Thus, puja is an expression of the expanded consciousness honouring the whole creation and seeking for His grace.

Make yourself into an offering: Namaskar or Namaste

Being judgemental or framing prior opinions in our thoughts are the common trait of homo sapiens. “Oh my god, I saw his face right in the morning, now my entire day is ruined. I don’t like him at all or I like this in him”; such optimistic and pessimistic thoughts are flying within us the entire day. To halt these constant commenting inside us, our Vedas and spiritual sciences have bestowed us with an easy way. Greet everybody with a smiling ‘Namaste’ and the instant results can be experienced. Here we’ll discuss about the magical effect that this salutation brings in our lives.

Meaning of Namaskar or Namaste:

The word ‘Namaskar’ is a Sanskrit word derived from ‘Namaha’ meaning ‘Not me’. If broken down further, Nam-As-Kar then;

Nam is to pay homage or obeisance

As is to exist or ‘Astitva’

Kar is the doer or the one who creates

Thus the salutation refers to offering gratitude to the divine power within every being, which has created the existence. Here the soul in one acknowledges and pays respect to the soul in another.

Bend the arms from the elbow upwards and face the two palms of the hands. Place the two palms together and keep the folded palms in front of the chest. The fingers should be relaxed and space should be left between them. Utter the word ‘namaste’ or ‘namaskar’ by bowing the head down and touching the mid-brow region.

Firstly the act of shaking hands is avoided due to hygienic purposes and avoiding contact related diseases like bird flu, influenza and so on. Further physical contact leads to the sharing of energies between them strongly, where the chances of transferring ‘Raja-tama’ (sexual purity) is prominent. Our motive is to increase the ‘Sattvikta’ component and not reduce it. Moreover, the namaskar between two people results in sharing spiritual frequencies between two people through various points in the body, as proven by science and also in one of the research by Ms.Priyanka Lotlikar.

Every time you perform your ‘saadhna’ by joining your hands together, there is a certain gush of energy flow into your body and you transform into a ‘state of giving’ and prosper spiritually.

Revering the God of Creativity:Lord Vishwakarma 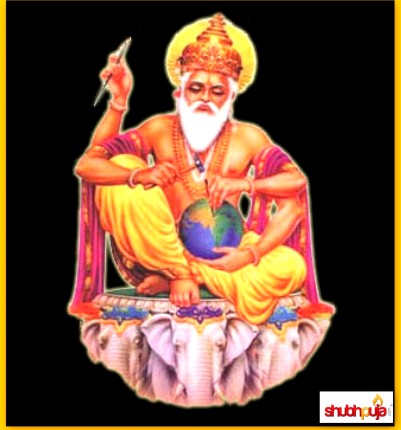 The creative son of Brahma, lord Vishwakarma is the official creator of the magical residing palaces of Gods. He is the sole designer of the eternal Universe and maintains the unique connection between Earth and Heaven. The peculiar trait weapon and flying chariots of gods have also been innovatively designed by Lord Vishwakarma. The God of Manufacture is worshipped by the skilled class of devotees majorly being architects, engineers, craftsmen, potters, carpenter, goldsmiths, blacksmiths and other factory workers.

Lord Vishwakarma is actually worshipped on the last day of the Bengali month i.e. Bhadra or Kanya Sakranti which falls on 17th September; but it is also celebrated on the fourth day of Diwali festival on Padyami. This festival has a major craze in Karnataka, West Bengal, Orissa, Bihar and Tripura, but widely celebrated by Indians globally.

Holiday for machines and equipment:

As the highest ranked creative God is being worshipped on this day and the entire industrial class revers him, this day is an official holiday for the industries. It is believed that the machines should take a peaceful rest on this particular day and let the glory of Vishwakrama fall upon them and make them more efficient. Factory owners also prefer buying new equipment or machinery on this day, as it is considered lucky and prosperous for their working.

Relevance of this day:

The day is not only auspicious for industries and machinery but also has further unique add on s. Govardhan Puja is also celebrated on this day to remember the miracles of Lord Krishna, when he saved the entire city of Gokul from the outrage of Lord Indra. To increase the bond of love between couples, Gudi Padwa is celebrated in which the newly wed couples are invited for special treats by the bride’s family.

This festival spreads the message of adoring creativity and boosting the talented God and his man power. It brings together people from the varied classes and leaves no distinction among them. When the entire working class comes together, it removes the pride of their ranks and they simply cherish their skills. Kite flying is also an important custom on this day, and Bihar and West Bengal arrange special kite flying festivals.

The laurels of Vishwakarma’s innovation have been mentioned in mythology and Vedas. He has been credited for the flawless creation of God’s abodes in the four ‘yugas’.

‘Swarg lok’ or heaven has been created by the talented Lord Vishwakarma, which is the abode of Gods and is ruled by lord Indra.

During the ‘Treta yug’, Vishwakarma built the beautiful golden city for Lord shiva and Parvati. This was later demanded by Ravana in return of ‘dakshina’; since then it was called as the ‘Raavan’s sone ki Lanka’.

The city of Lord Krishna, Dwarka has been established by Vishwakarma in the ‘Dwapar yug’, which is now a renowned pilgrimage for Hindu devotees.

Lord Vishwakarma’s magic is also evident during the ‘kali yuga’, when the pandavas were ordered to live on a piece of land named ‘Khaandavprastha’. He transformed this barren land into a magical city of Indraprastha, which was known for its architectural beauty.

Power of OM : Why should we chant OM?

The entire universe is composed of vibrations which produce audible and inaudible sounds, which are experienced by living beings. ‘Shabda Brahmane-nishnata parambrahmadi gachhati’ means the primordial sound which is the base of our creation and source of everything. As one gets immersed in the Shabda Brahman i.e. OM, he enters in to the Parabrahman (all-pervading one-consciousness) automatically. So OM is the prime subject around which the entire creation revolves, it is the permanent truth within which everything exists.

The word OM or often spelled as ‘AUM’ is a three letter word composed of A, U and M; each letter symbolising different state of time.

As we chant AUM we connect with our true self by which we ultimately connect with the Supreme power. As in the sixth verse of Bhagvad Gita, Lord Krishna says “Etad-yonini bhutani sarvanitya upadharaya. Aham krtsnasya jagatah prabhavah pralayas thata”. He says that the entire creation is born out of me and it resides in me, and dissolves back into me. Chanting the eternal mantra OM results in the production of a vibration that resemble the original vibration, produced at the time of creation. The sound AUM, when chanted, vibrates at the frequency of 432 Hz, which is the same vibrational frequency found throughout everything in nature. Relevance of this word is not only mentioned in Vedas but also in holy Bible, “In the beginning was the Word and the Word was with God and the Word was God.”

Thus the power of chanting OM infuses us with energy that makes us serene and divinity is experienced. Meditating while chanting this mantra leads us to the state of knowing our true self, which explain that soul is immortal and dissolved in the eternal Universe even after the physical body dies.

Scientifically, the correct method to chant AUM is to pronounce A for 3 seconds, U for 5 seconds and M for 6 seconds. As one repeats the mantra for 15 to 20 times, with each passing time the state of deep relaxation will be achieved. So focus on the power of OM and release all your worries by easy meditation.